Senior Master Sgt. Sacked for Marriage Stance - by His Commander

US Secretary of State John Kerry made official today what is most likely the False Flag claim that forces loyal to Assad were the ones responsible for using chemical weapons. He added that the US is seeking support for military airstrikes, presumably from a possibly compliant EU. Russia, fortunately has indicated that she is not convinced that the blame has been correctly placed and is warning against any moves at this point.

Which got me thinking-

Am I crazy, or does Defense Secretary Chuck Hagel always look like he just finished a three-day bender? 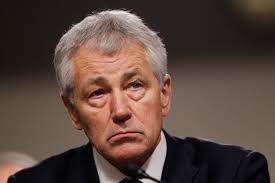 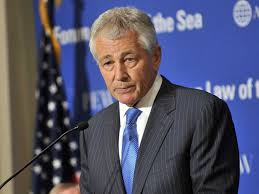 What is being done to our military is far worse than making it a proving ground for social engineering in the US; it is the first organization of many to come in which one will be ruined for the mere act of admitting that certain behaviors are wrongful. Even when you have made very effort to keep your thoughts to yourself, you will be compelled to tell them what they want to hear or face the consequences.


"Senior Master Sgt. Phillip Monk has served in the U.S. Air Force for 19 years with a clean service record. But his new lesbian commander has relieved him of duty and is threatening his career, allegedly because of his Christian beliefs regarding gay marriage. Officials are investigating as Monk appeals his punishment.

Monk was First Sergeant of the 326th Training Squadron, stationed at Lackland Air Force Base in San Antonio, Texas. According to his attorneys, Monk recently returned from a deployment and found he had a new commander, Maj. Elisa Valenzuela, who is openly lesbian.

Monk explained to Fox News that in one of their first meetings, Valenzuela discussed wanting a chaplain to offer a benediction, but she, “objected to one particular chaplain that she called a bigot because he preached that homosexuality is a sin.” Monk says the commander’s response was, “I don’t know what kind of people actually believe that kind of crap.”

Monk is a devout evangelical Christian, and as such he believes marriage is the union of one man and one woman.

Fox News’ Todd Starnes reported that there was an episode involving Valenzuela with an Air Force trainer discussing gay marriage. The trainer referenced the decline of the Roman Empire, and Monk explained to Shannon Bream on Fox & Friends that the trainer was lecturing on how such issues can divide society with detrimental effects.

Valenzuela allegedly wanted to harshly punish this trainer, and solicited Monk’s recommendations on how to respond. Monk suggested the commander use it as an opportunity to teach tolerance and diversity instead. Valenzuela told Monk that they were not on the same page, and that if he did not get on his commander’s page he would not be allowed to continuing serving in his current position.

Then Valenzuela gave Monk an order, demanding Monk tell her whether he regards those who oppose gay marriage as discriminating against homosexuals. His attorneys add that he was told that supporting gay marriage was now military policy, and that he was not allowed to disagree with that policy."

Note that, in the Uniform Code of Military Justice, there is a strict difference between a Lawful Order that is given by a Non-Commissioned Officer (Sergeants and Petty Officers) and a Direct Order, which is given by a Commissioned Officer (Lieutenant/Ensign and above). Unless the latter consists of an inherently illegal act, it must be followed. In the event of a disciplinary process following the refusal to carry out a Lawful Order, the accused may have a chance of defending himself if he can provide an affirmative defense - a clear reason why the order could not be followed without resulting in a breakdown of order or a gross violation of procedure. In the case of a Direct Order, subordinates do not have the same luxury - the mere act of an officer clearly stating his desire is sufficient to be considered to have the effect of a direct order. If following the Direct Order does not requiring breaking a law, then it must be carried out. If a soldier has been tasked with staffing a guard post, and a Commissioned Officer orders him to leave that post without proper relief, as long as the soldier informed the officer that leaving the post would render it unguarded he is required to leave that post. (Of course local rules may be different, such as when guarding Nuclear Weapons, but you get the idea).

Valenzuela used her authority to force Senior Master Sergeant Monk to provide an answer that he tried to avoid giving.

"Monk claims he responded that he could not answer Valenzuela’s question the way she wanted, and that he feared expressing his true beliefs could put him in legal jeopardy.

Monk was then relieved of his duties.

“I was essentially fired for not validating my commander’s position [regarding] homosexual marriage,” Monk explained to Fox News................"

[Unit Spokesperson Collen] McGee also provided Breitbart News with Local Operating Instruction 36-03. Section 13.3.1.2 forbids language that “degrades, belittles, or demeans,” or “slanders” anyone’s “sexual orientation,” and includes specifically that language can be forbidden if it insinuates that such conduct is “immoral.” When asked if observant Christians expressing orthodox Christian beliefs regarding sexuality and/or marriage would be regarded as violating this prohibition, McGee had no comment.

[Liberty Institute Council Jeff] Mateer says this incident is part of a pattern emerging throughout the military under President Obama. Mateer says many service members do not “come forward publicly due to fear of retribution, which would destroy their military careers.” Mateer explains that these instances are increasingly widespread, but most service members feel constrained not to speak out because they want to keep serving their country and also need to provide for their families.

Breitbart News has reported in recent months about serious threats to religious liberty—especially for observant Christians—in the military. As previously reported, the Obama-Hagel Pentagon held a series of meetings with an anti-Christian activist with a record of making shockingly-offensive statements against service members of traditional faith, and recently an ordained Christian chaplain was officially censored for merely quoting the old adage that there are no atheists in fox holes..........."

The pace of attacks, firings, and censuring is not going to slow down one bit. The Beast has momentum , and it has no plans to lose this opportunity to not only silence people, but to force them to confess agreement its agenda.

Posted by Pleistarchos at 9:15 PM