Common Core Forcing Students to be Incapable of Doing Equations

I have written posts on the Common Core (links at bottom), but until now I have not treated actual examples of how American children are being mal-taught (the prefix "mis"has connotations of mere incompetence rather than willful wrongdoing) basic math.

In 2012, I did a fairly detailed post on the pre-Common Core system of "sight words", which has already created generations of functional illiterates that followed a pre-sight word US in which people with 6th-8th grade educations were very good readers:

Here is how American students are now taught to add double-digit number to a single-digit number. Again, this system cannot be the result of honest stupidity; it is the work of collectivists who need a formerly well-educated US electorate turned into people who can do little for themselves and achieve even less:

Step 2: Look at the greatest number.

Step 2 Sub-step 3: Write the tens and the ones in a number bond.
Step 3: Check your number bond.

Step 3, Sub-step 2: Will the two parts make the whole greatest number?
Step 4: Join the ones together.

Step 4, Sub-step 2: Write the equation to add the ones.

Step 5, Sub-step 1: The second number will be the ones from step 4 (“part” that is left from the number bond).

Step 6, Sub-step 1: It should be understood that the two equations are equal. 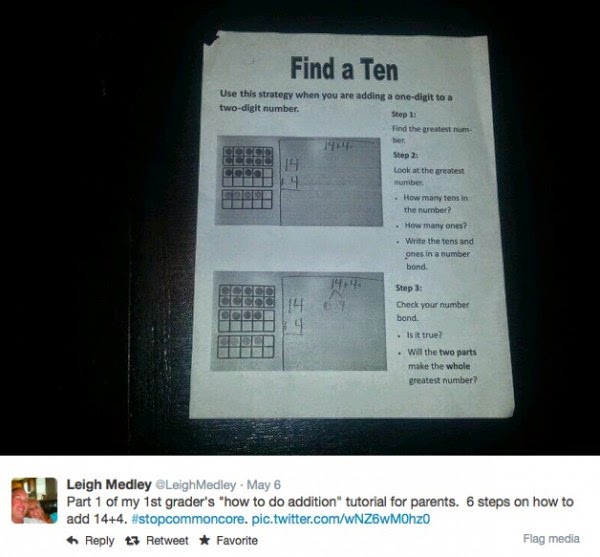 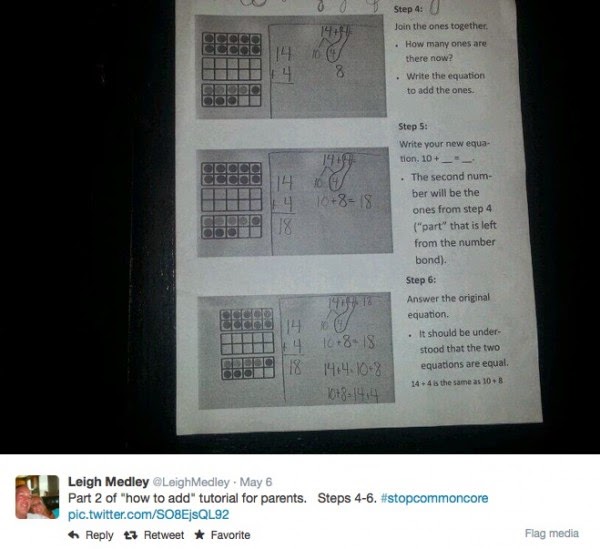 At what point will enough be enough for you?

The Common Core Curriculum is the new standard  for American schools that has been so thoroughly pushed that, as of now, 45 US states have signed on to the program.To save space, I will refrain from going into detail on the Common Core. Credible information on the program is readily accessible via Internet searches. In short, the Common Core is the principle means by which the youth of the United States will be both subjected to a lower grade of education than American students of the past two decades (unbelievable but true), and fully brainwashed to hold to an anti-Western/US and pro-Left/Islam mindset. It is rife with highly sexualized content, including sexual assaults sickeningly being portrayed as something other than violent  crimes. Its history material has content that paints the US - from its inception, as being just plain wrong from the beginning. Islam is pushed as a force of peace, tolerance, and enlightenment.The average American parent is unfortunately weak in spirit and will acquiesce to these without a fight. What they will object to, however, is the horrific lowering of standards for literacy, science, and mathematics central to the Common Core. One requirement of Common Core is that even older students use informational pamphlets, such as those made by government agencies, in class for reading material. These are written in an - at best, fifth grade reading level. Mr. Small nailed it when he shouted that this program is setting up the student for a a ticket to a Community College. Under this program, any youth  that does not get tracked for Honors-level classes from the beginning of  primary school will have learned an immeasurable amount less than a student in any other reasonably developed nation. In the case of US and World History, what he will have learned is so twisted as to have the effect of  outright lies. In American schools, the US involvement in the Philippine Insurrection is already being described as an act of genocide even though US actions did not meet any of the criteria specified by the UN's definition of that crime.This movement has been going on for a long time. The Common Core is only codifying this trend and guaranteeing that the quality of education will go even lower and remain there. High School Spanish students (I am fortunate that we were able to put my youngest through Catholic high school) are already often taught next to zero about that language. When my son was talking about this with his cousin who attends the high school in our municipality, I was shocked to overhear how little he knows. In  a move that effectively told the students that they would learn nothing in his class, his teacher even made a comment at the start of the year to the effect that the only way to learn a language is to live in the nation in which that language is spoken. I provided examples from my Sophomore year (such as verb conjugations in the imperfect and preterite) to him in an effort see if he is learning what I learned in Spanish II. The poor child just shook his head and replied that the teacher had not even mentioned a word of these. He then added that they watch Spanish videos while the teacher sits at his computer. What this teacher does is have the students regurgitate a few words and short phrases of Spanish and leaves it at that.What we are witnessing is the full blooming of the intentions of John Dewey, an early American Progressive who was as enamored with the educational system of the USSR as he was with the thought of the subjugation of the People to Socialism. While the writer in the link*, Bruce Price, gives Dewey far more credit than I would (Price seems to hold that Dewey may have been merely mistaken), he nonetheless provides the best through yet short summary of the work of the Father of the Decline of American Education. Any parent, would-be parent, or American simply concerned about his nation should read about Dewey and the "educators" who followed in his footsteps.* http://improve-education.org/id42.html
----------------------------------------------------------------------------

"......"U.S. Secretary of Education Arne Duncan reportedly said on Friday that some of the opposition to the controversial Common Core State Standards is derived from wealthy white mothers upset to learn their children are not as bright as they thought.

"........While school administrators run about panic-stricken, trying to persuade concerned parents that the Common Core should be "given a chance to succeed", Americans across the nation are responding to the nationwide system that guarantees that pathetically few students who do not attend private schools (or home schooled) will be prepared by their K-12 education for little more than junior colleges.The Leftist elite have done their homework well. Tired of dealing with annoying young adults who have learned enough to challenge the establishment (witness the shocking amounts of college students who have even recently flocked to Ron Paul's message), they have created a system that locks the vast majority of primary school students into a tracking program that makes functional illiterates, has them counting Stone Age-like on their fingers, teaches them that Westerners are the cause of all the evils in the world, has them reading works that are sexually explicit in nature, and contains material blatantly  designed to make them think highly of the now Socialist-driven Democratic party.-and much of this came even before the Common Core, the creators of the new program just no longer make any attempt to hide their intentions and have entrenched it across the nation.
Recall the reason behind the book-burning system of Ray Bradbury's Fahrenheit 451. Reading material that allows people to learn things and develop their own understanding, excites the intellect and helps one understand his sense of indentity, causes one to question what one is being told by the establishment, and enhances creativity must be destroyed. As Leftist thought is itself utterly unimaginative* and reliant on a hyper-exaggerated and often patently  false version of world history, the People must be rendered either unable read on learn on their own or made to be so hateful of their past that they will not want to read about it.*Note that Marx looked at the problems of the industrial revolution, which was a short blip on the radar in the big picture of world history, and from there decided that the only response to this was the creation of a world system that eliminated any real rights to property (land or earnings), the family (women were to have children with multiple men and the latter were to have no appreciable involvement  as fathers), the societal brake of religion, and virtually anything else that has proven to work far better than any attempt at Socialism.Pope Leo XIII treated this phenomena with far more common sense and imagination than did Marx, but his message is ignored by almost everyone:..."