In our dystopian society, we live by Big Brother's maxims:

The few who dare to dispute what is fed to them by the Left are no longer merely being mocked. Hateful of anyone who will not acquiesce to mind-altering and societal-rotting laws and regulations that only increase the power of the State at the expense of actual human rights, the bots now will stop at nothing in their attacks.

After the story of the Honorable Ms. Holly Fisher, take note the vicious comments made to and about her. In the case of those made by males (certainly not men), these disgusting cowards hide behind the laws that allow them to so in safety. As recently as 200 years ago, treating a woman in a manner that wasn't half as bad as we see today would end with a real man slapping the offender in the face and a demand to meet the following morning  for his choice of pistols or swords to settle the matter.

It's well done- Chik-fil-A for Pro-Marriage, Pro-Life (self-explanatory), and Hobby Lobby for Pro-Conscience. 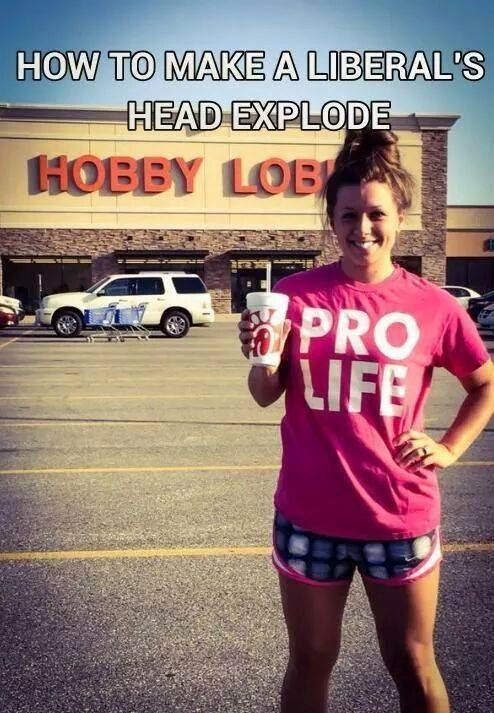 ".......Today we’re seeing a mother of three and wife of a Army combat-infantry vet get pummeled with hateful intolerance for simply being pro-life supporter of Hobby Lobby. - See more at: http://www.libertynews.com/2014/07/exclusive-intolerant-hateful-left-lashes-out-threatens-mom-of-3-in-response-to-her-viral-facebook-photo-supporting-hobby-lobby-pictures/#sthash.83UglIXM.dpuf.........

'This chick probably just takes it in the butt so that she doesn’t get pregnant. Hahaha – Blake Nolen'
'I’d hit it. Tell her I have a condom on. Then peace out on her and see if she’s wearin that shit in 36 weeks. Meanwhile I changed my number. Deuces! – Thomas Borchert'

'Or how to make yourself look like a homophobic, religious radical douche… yup you nailed it! – Corey Duncan'

All i see is a brainwashed woman [In truth she sees nothing of the sort, (nor what follows) but then again honesty is no longer something of value], with no original thought in her brain and will continue pushing women to be put back in their place, in the kitchen with no job and popping out babies, blaming women for rape because of way the she dresses..this is what she will teach her daughter, that you are an object to men, not their equal and you shouldn’t protect yourself from getting pregnant and push abstinence, that her daughter won’t follow and will either get birth control for herself if she is smart, or get pregnant.. then an ass hat who can’t put carts in the corral.. again brainwashed female, we are born not believing in anything, it is the parents who force an imaginary man, whose life is written by men in a fictional book. – Michelle Spear..................

I reached out to Holly and she said “one guy told me he would kill me by shoving the cup down my throat.” Holly says the response has been overwhelmingly positive in general........"

It gets worse. You will have a hard time finding a male who is less of a man than this one:

Posted by Pleistarchos at 10:42 PM